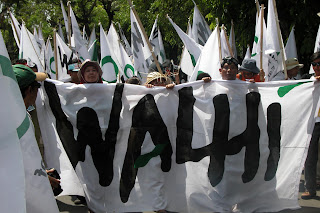 National News – December 09, 2007
Luh De Suryani, Contributor, Denpasar, Bali
More than 2,000 members of local and international civil society organizations gathered at Bajra Sandhi park in Puputan Renon, Denpasar, on Saturday morning to protest against the proposed carbon trade scheme known as REDD (Reducing Emissions from Deforestation and Degradation).
“REDD no, climate justice yes,” shouted Nyoman Sri Widhiyanti, director of the Bali branch of the Indonesian Forum for the Environment (Walhi), as she lead the march.
Nyoman said the carbon trading scheme would only benefit developed countries and large-scale corporations.
“This is an unjust scheme for indigenous communities in developing countries,” she said.
“Stop talking about business, think and talk about the fate of the local people,” said a representative from the Indonesian Alliance for Indigenous Communities (AMAN).
The Saturday gathering involved AMAN members, as well as farmers, craftsmen and fishermen, and members from traditional communities, an international farmer’s network, the Korean youth forum, Greenpeace, Via La Campasina and many others.
The group marched from the Bajra Sandhi Monument in Renon, Denpasar, for almost an hour to reach the Bali Provincial Legislative Council building.
Hildebrando Velez G, a speaker from Via La Campesina, said climate justice was a more important issue than climate change.
“The Latin American countries and other developing countries in the world must wake up … and fight against capitalism, which endangers people’s rights,” Velez said.
Chalid Muhammad, executive director of Walhi, said talks, discussions and negotiations at the current UN conference on climate change in Nusa Dua had so far only focused on trade issues rather than climate justice.
Taufiqurohman, a 72-year-old farmer from Bandung, took part in the activity.
“I lost 26 family members in the landslide at Leuwigajah dump site in Bandung, West Java, which claimed 153 lives,” he said.
The Bandung administration and other provincial administrations in Indonesia have failed to successfully manage garbage disposal.
“They don’t care about people living adjacent to dump sites,” he said.
Taufiqurohman and others questioned the ability of the Indonesian government to handle the delicate and complicate carbon trade scheme.
“How can Indonesia deal with such a difficult thing?” argued Chalid, adding the garbage issue alone was a never-ending problem for many cities in Indonesia.
Kartini, a lecturer from Udayana University, criticized the Indonesian government’s agriculture policy, which she said affected farmers, and more importantly, the environment.
“The government has long been pushing farmers to use chemicals to boost their harvests,” she said.
As a result, she said, the once fertile farming lands in many parts of Indonesia are now saturated with heavily toxic substances that can adversely affect people’s health and the ecosystem.
The gathering involved numerous public figures such as actress-turned-activist Rieke Dyah Pitaloka, presenter Tantowi Yahya, singer Franky Sahilatua and other celebrities.
“This is the right moment for Balinese people and other people around the country to voice their opinions,” Widhiyanti said.
Chalid added the aim of the gathering was to put strong public pressure on all leaders and policy makers at the UN conference.
(http://www.thejakartapost.com/yesterdaydetail.asp?fileid=20071209.@02)